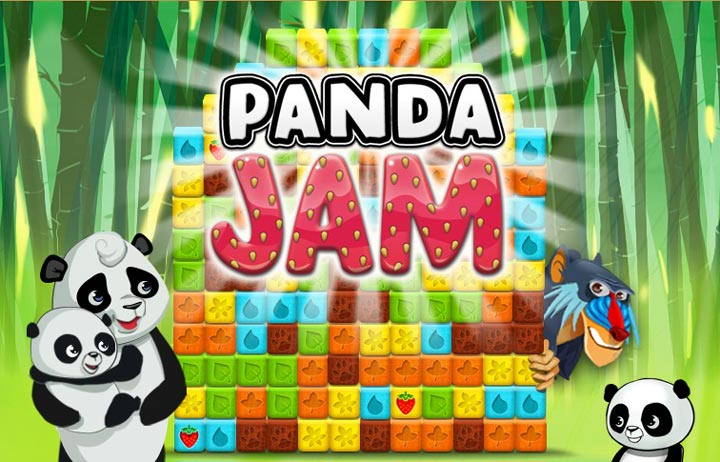 Panda Jam is yet another incarnation of Diamond Dash, Bejeweled, and other ‘match–3’ type games – distant cousin of Tetris?  Okay maybe that’s too much of a stretch.  But the concept is similar nonetheless.

Is it just me, or does the animation look like Kung-Fu Panda meets Lion King?

Panda Jam in not a bad clone all things considered.  It’s a bit plain and the graphics are okay, but the real mild irritation is the balance between free play rewards versus the paid power-ups.

Panda Jam feels a bit cheap on the freebies.  But it is a fun game and it’s easy to see why it’s gaining in popularity on Facebook. The basis of “Panda Jam” is completely unoriginal – there are hundreds of online games out there with the concept of clearing clusters of blocks the same colour. SEG, however, has at least added some interesting elements – the most interesting of which are the completely adorable pandas – which make “Panda Jam” one of the best Facebook games available in this genre.

Most children over the age of nine could grasp the concept of the game. Each level begins with a grid full of colourful blocks – brown, green, yellow, blue and orange – and at least one adorable baby panda sitting on top of the pile. Blocks are cleared by clicking on clusters of more than three blocks of the same colour. All the while an evil baboon is cranking out more rows of blocks from the bottom.

Clearing the blocks directly beneath the baby panda brings him closer to the ground. Once the baby panda hits the ground, he is returned to his mother and the level is complete. However, to actually beat the level one requires at least a one-star rating, which is achieved by clearing blocks with strawberries encased. Enough strawberries will fill up your star-meter, and the more stars you achieve, the more gold you are rewarded with!

“Panda Jam” doesn’t seem like an overly strategic game at first glance, and seems more of an arcade/action game than a puzzle game. However, as the levels progress you begin to see where strategy comes in handy – especially once the evil baboon begins to encase blocks in ice.

Players have a limited amount of moves, so it’s important to be conservative with them. Getting the panda out in as few moves as possible shouldn’t be a priority, since you still have to collect those strawberries, but it’s important to keep the panda as close to the ground as possible so that you don’t find your little guy stuck at the top when you only have five moves left.

Power-ups can be helps or hinderances. It is possible but very difficult to win without a single power-up. Each power-up costs a decent amount of gold, so it’s important to not waste money on these. The overall key to success at “Panda Jam” is to remember to keep everything in moderation and not get fancy!

“Panda Jam” is still in the Beta phase, so there are few, if any, known cheats floating around on the Internet. However, there are some pretty reliable strategies to get through the levels, and that involves applying knowledge from the very beginning of the game. Contrary to what some may expect, there’s no scoring bonus in “Panda Jam” for finishing with a lot of remaining moves.

The amount of gold you get after a round is purely as a result of your star rating – fifty gold coins for each star rating. There are also no extra points for finishing with more strawberries than what you need to achieve a three-star rating – so don’t get overzealous. When it comes to power ups, be wary. By default, the game will select power-ups for the player at the beginning of every level. If you don’t want to use a power-up, de-select it manually to save your gold.

As for knowing which power bombs to spend gold on, it highly depends on the level. Colour bombs are useful in almost every level, while fireworks and small area bombs are more useful in levels with ice blocks.

The social aspect of Panda Jam is pretty insignificant; it is only really useful for seeking out hearts, which is hardly necessary considering that hearts replenish after half an hour. While SEG does make it easy to get extra lives, once your gold runs out you may find yourself in a pickle. Since the game is still in the Beta phase, SEG might benefit from lowering the cost of power-ups or dolling out greater rewards at the end of every level.